I recently created a DevOps Lab monstrosity that I’m using for web app testing that I have located on a separate subnet. This experiment definitely helped me gain some hands on experience setting up Ubuntu Linux servers along with a better understanding of networking protocols and how to configure & setup servers that are located behind a firewall.

Granted, the hardware is definitely not something you’ll see out in the wild, but the specs are actually comparative to to many cloud server packages that are available today. So I was able to test various server configurations on limited hardware that was definitely close enough to tell me whether or not something was going to run smooth or slow down to a crawl when handling any kind of network load.

For those of you wondering why the hell would I do this & if I’ve ever heard of using VirtualBox for app prototyping and testing. Yes, I in fact have/had a 1U rack-mount server running 5 Virtual Servers in VirtualBox. This was also a great learning experience. I also had a shit ton of laptops in my basement left over from a few years ago when I attempted to start my computer repair business. I say “attempted” because I quickly realized it wasn’t something I really wanted to do & it was quickly becoming a pain in the ass.

There also the fact that, for me there is just something about setting up and working with bear metal hardware. Yes a stack of old laptops with there LCD’s removed is definitely not what people think when thinking of bare metal server hardware.

There was also the very real cost of how much power the 1U Rack-mount server sucked up in comparison to 8 laptops that that are running off of 4 AC adapters. With the LCD screens removed the power draw for each computer in much lower, so I spliced the power adapters so that 1 adapter can power 2 laptops. I do have a larger amperage Dell PSU that was from a XPS and that one is powering 4 “half-tops”. This allowed me to power down my 1u server for the time being to save on power consumption costs.

Here is my awesome homemade devOps Test Lab. I will be creating a post in the near future that will go over the details of the “build” 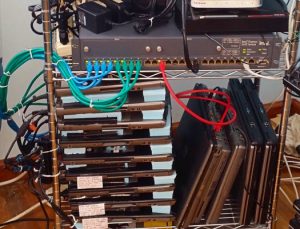 Check back soon for updates, a breakdown of the hardware used, network configuration settings along with another DevOps Lab Build…The totally awesome Mini-Ops Lab-DevOps OTG!

Until then, peace out homes,